Applications for TEFAF | New York | Fall 2016 were open to galleries from around the world. The new fair was met with such enthusiasm, that the organization received a multiple of applications for the number of spaces available for such a prime midtown Manhattan location. A Selection Committee was formed and a review process created to provide a balanced and objective analysis of each gallery’s qualifications and potential fit for a New York-based fair.

The resulting list of 2016 exhibitors are leaders in their respective fields internationally, a number of them either showing for the first time in New York, or returning after a long absence. Exhibitions will flow throughout the Armory’s landmark building encompassing the Wade Thompson Drill Hall and extending to both the first and second floors of the Armory’s period rooms, creating a fair of unprecedented depth and impact in New York City. Tom Postma Design, celebrated for its innovative work with leading museums, galleries, and art fairs, has developed designs for the fair that interplay with the spectacular spaces while giving them a lighter, contemporary look and feel.

The beneficiaries of the Opening Night Reception on October 21 will be the Society of Memorial Sloan Kettering as well as the acclaimed cultural programs produced by the Park Avenue Armory.

TEFAF will release more information about the programming and partnerships with prominent and upcoming international cultural players in the next few months.

TEFAF | New York | Spring, a second annual fair focused on Modern and Contemporary Art and Design, will premier in May 2017 and run from Thursday, May 4 through Tuesday, May 9.

About TEFAF (The European Fine Art Foundation)
TEFAF produces one of the world’s leading fine art fairs. Held annually in Maastricht, Netherlands, it has come to define excellence in the way the art world does business. TEFAF sets a standard for collectors, connoisseurs, curators and other art enthusiasts from all over the world. The Foundation supports several charities, such as the Prince Claus Fund’s Cultural Emergency Response Program, the TEFAF Museum Restoration Fund and Cancer Research at Maastricht University Medical Centre.

The TEFAF Museum Restoration Fund contributes to the conservation of objects that are in museum collections and supports the sharing of knowledge about conservation with other museums and the general public.

Since 2005, TEFAF has been supporting research and international collaboration by means of a special Chair of Oncology at the research institute GROW, the School for
Oncology and Developmental Biology at the Maastricht University Medical Centre.

In terms of contributions to the knowledge of the business of art, TEFAF’s annual Art Market Report has provided critical insights on art market performance and the effects of globalization and change in the broader economic climate.

About Artvest
Artvest Partners LLC is an independent art advisory firm that counsels private clients, museums, foundations, and Fortune 500 companies on valuations, market projections, acquisitions, dispositions, and business strategies related to art. Additionally, Artvest arranges art financing for private collectors and dealers. Since its founding in 2009 by Michael Plummer and Jeff Rabin, Artvest has guided clients from around the globe on projects in the billions of dollars. In 2014, Artvest was named as an Expert Witness for the Detroit Institute of Arts and the City of Detroit in the City’s Chapter 9 bankruptcy trial. Since 2014, Artvest has owned and managed an art fair held annually in May at the historic Park Avenue Armory, Spring Masters New York, a fair that will be re-launched in 2017 as TEFAF | New York | Spring. www.artvest.com

About TEFAF Maastricht
Held annually in March in Maastricht, Netherlands, the fair offers the best on offer of over 7,000 years of art. The 2016 edition of the fair presented 270 of the world’s leading galleries from 20 countries. In addition to the traditional areas of Antiquities, Asian Art, Old Master Paintings and Antique Works of Art, TEFAF Maastricht exhibits a wide variety of Classical Modern and Contemporary Art, Photographs, Jewelry, 20th – Century Design and Works on Paper.

TEFAF Maastricht is unequalled in its standard of quality and in the methods it uses to establish the authenticity of every painting and object for sale. Participating dealers are only admitted after a strict selection process. TEFAF’s ground-breaking vetting system involves no fewer than 175 international experts in 29 different categories who examine every work of art for quality, authenticity and condition. Highly sophisticated technical equipment, such as the advanced Hirox digital microscope and the portable X-ray fluorescence spectrometer, supports the vetting members’ personal expertise.

The upcoming edition of TEFAF | Maastricht will run from 10-19 March 2017. www.tefaf.com

Since its first production in September 2007-Aaron Young’s Greeting Card, a 9,216-square-foot “action” painting created by the burned-out tire marks of 10 choreographed motorcycles—the Armory has organized a series of immersive performances, installations, and works of art that have drawn critical and popular attention. Among the highlights of its first eight years are: Bernd Alois Zimmermann’s harrowing Die Soldaten, in which the audience moved “through the music”; the unprecedented six-week residency of the Royal Shakespeare Company in their own theater rebuilt in the drill hall; a massive digital sound and video environment by Ryoji Ikeda; a sprawling gauzy, multi-sensory labyrinth created by Ernesto Neto; the event of a thread, a site-specific installation by Ann Hamilton; the final performances of the Merce Cunningham Dance Company across three separate stages; the New York Philharmonic performing Karlheinz Stockhausen’s sonic masterpiece Gruppen with three orchestras surrounding the audience; WS by Paul McCarthy, a monumental installation of fantasy, excess, and dystopia; a sonic environment that blurred the boundaries between artist and audience created by The xx; an immersive Macbeth set in a Scottish heath and henge by Rob Ashford and Kenneth Branagh; tears become…streams become…, a genre-defying collaboration between artist Douglas Gordon and pianist Hélène Grimaud, which flooded the Armory’s drill hall with an installation of water, light, and music; and HABEAS CORPUS, a performance and installation by Laurie Anderson based on the story of a former Guantanamo Bay detainee that examines lost identity, memory, and the resiliency of the human body and spirit. Since 2013 the Armory’s annual recital series, which is set in the Belle Époque salon setting of the historic Board of Officers Room, continues to showcase and celebrate talent from across the globe.

The Armory’s arts education initiative offers programs at no cost to underserved New York City public school students and includes Production-based Programming, in which students attend major productions of music, theater, dance and visual art, and participate in pre- and post-visit workshops with the Armory’s talented corps of teaching artists; School Partnership Initiative, in which deeper relationships with underserved public schools are created through attendance at productions, in-school residencies, workshops and end-of-term events in the Armory’s historic rooms; and the Armory Youth Corps, a paid and closely-mentored internship program focusing on at-risk high school students.

Concurrent with the development of its artistic program, the Armory has undertaken an ongoing $210-million revitalization of its historic building, designed by architects Herzog & de Meuron. www.armoryonpark.org.

Note for Editors •
Go to www.tefaf.com/press for press releases and high resolution images. 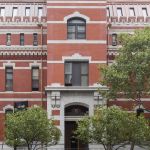 The images featured in this page have been supplied to Studio Esseci sas by the Organizers of the event, for uses connected solely with the Press Agent requirements of the event itself. You are only entitled to download these images if the purpose of this download is to use the images as illustrations for articles, reviews or listings of events published in this site. Any other use of said images will be considered a violation of copyright, leading to prosecution to the full extent of the law.